Benedictines and bubbly; the Abbey of Saint-Hilaire

From the village of Limoux, not far from Carcassonne, the road to Saint-Hilaire and its Benedictine abbey, winds through woods and vineyards. In October, the mists and autumn colours add to the sense of time-travel as stone walls loom out of nowhere. This probably means you are lost, as we were, and that you should have taken the much shorter road. But then you would not have seen the cemetery on the hill, blooming with chrysanthemums in preparation for Toussaint, All Saints' Day, a national holiday when the French pay their respects to their dead.

The dead were all around me as I walked alone in the cloisters, the only visitor to an abbey founded in the early 9th century, the place where the body of Saint Hilaire was buried. It was mentioned at this time in a charter from Louis le Debonnaire, confirming donations from his father Charlemagne to Abbot Monellus of St-Hilaire. Early features remain in the later buildings and over time, the village has crept from outside the abbey walls to lean over the church itself.

If you love medieval history, as I do, you will find treasure here. One of the fascinating characters who has turned up in my 12th century research is the Master of Cabestany but I never expected to find one of his masterpieces in this little village in the Languedoc. Made of one slab of white marble from the Pyrenees, this 'sarcophagus' is more accurately an altar piece because it is far too narrow and could not contain a corpse.
Look at the people, gawking out their windows as the martyred Saint Sernin is beaten and torn apart by a goaded bull. He still manages to bless the two women who pray for him. Medieval brutality and Christianity in all its horrific richness.


The identity of the Master of Cabestany is a mystery but his - or could it be their? or even her? work is famous throughout Catalonia, known for a certain style. I find it strange that the story progresses from right to left and, having written about left-handers, I wonder whether this was an accidental left-handed reversal of European writing convention? Or deliberate left-handed choice? Or could the Master have been from another culture, where writing flowed from right to left? It seems more than odd for an artist of this quality not to be aware of conventions. Do let me know your theories!


Mysteries and ghosts were all around me and I jumped when something brushed my leg - a cat who accompanied me with the air of a guide who knew all and wasn't telling. Many monks must have met unnatural ends here and when you climb the pulpit in the monks' refectory, you hear your words of warning ringing out around the hall. The protection of the Counts of Carcassonne was not enough to keep the abbey safe in the madness of the Albigensian Crusade that swept Languedoc in the 13th century and the monks were accused of heresy and merged with Les Frères Prêcheurs, the Dominicans.

The Benedictines emerged from their troubles and endowments from the local nobles continued. Naturally the Abbot's apartment benefited from such generosity and I was feeling cynical as I walked into a room that took my breath away. The textures and patterns on the ceiling reminded me of those in the Palace of Joy in Zaragossa but the addition of satirical portraits make it look like an illuminated manuscript, with which a scribe has had fun in the margins.

The walls bear the shields and names of all the Abbots and you can imagine how excited I felt at seeing the dates 1146 and 1154. I get the shivers every time I come across details of the period I write about.

Perhaps the Abbey's biggest contribution to the world came in the 16th century. In 1531 the monks created what is claimed here to be the first sparkling wine in the world, the 'blanquette' for which Limoux is now known and I stood in the very 'cave' or cellar where a monk was surprised by bubbles forming in the corked bottles of white wine, as if they were undergoing a second fermentation...


From its origin in this cellar, bubbly gained international popularity, leading 17th century Irish dramatist George Farquahar to comment, 'Brut sparkles like the lively remarks of a man of wit.'
As I turned to go, I sensed a lighter presence than the black monks. A faded inscription above a door lintel gave me enough of a clue to work out who used to come here and why. Can you figure it out? 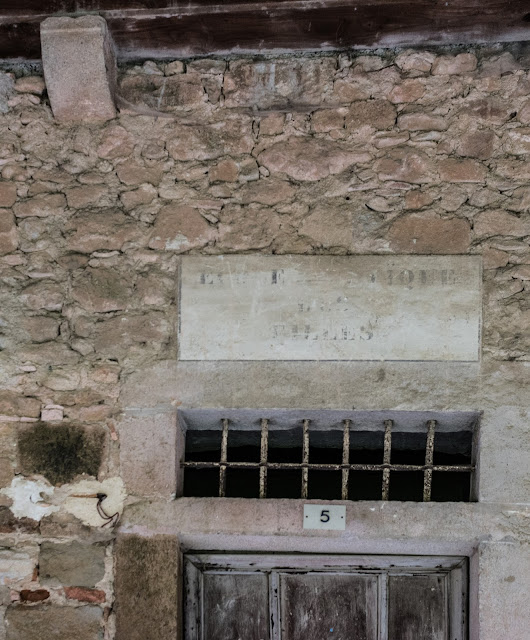 A long discussion with the Abbey curator confirmed my guess - this became the 'Ecole Publique des Filles' in the 19th century so the girls and small boys from the village came here for their lessons. The curator also clarified much else about St-Hilaire and played troubadour CDs for me. Now all I need to know is whether Estela and Dragonetz passed this way, and, if so, why.