The Moors who stayed; Zaragoza, Spain


Zaragoza: even the name sounds magical, a fantasy city, and the more I found out about its history, the more I needed to see its medieval treasures. What could stones and ceiling patterns tell me about the people who lived in this city a thousand years ago? About the little boy, Malik of the Banu Hud, heir to the throne of Zaragoza, whose life I wanted to understand as he grew to manhood? Was there a spirit of place?


My guide books told me what to see and what to think, veiling me in a mental burka, but for this trip I was determined to see through the eyes of a 12th century Muslim growing up in the palace of his ancestors, the Kings of Zaragoza. The 12th century? Not to Muslims, for whom this was the 5th century in the Year of the Hijra.

Guide books make a big deal about freedom. Places are 'conquered' and 'liberated' but these are often words that can be interchanged, just by changing the point of view. Zaragoza's medieval citizens inherited the infrastructure left by the the Romans for whom it was Caesaraugusta. A city can have many names in its lifetime and each one is a layer of history and language. Caesaraugusta became Saraqusta (Moorish), then Zaragoza (Christian). A visitor is left in no doubt that this is an ancient city, dating back to about 25 BCE (to use the 'neutral' term for the year).

After the Romans came the Visigoths, Then, for 300 years, Moors ruled the city and state of Zaragoza.

The building I had come to see was the Aljaferia, the only surviving example of a palace from the time of the Muslim Taifas (Kingdoms), legacy of the Moorish Banu Hud dynasty and Malik's childhood home. The oldest part dates from the 9th century and is known as The Troubadours Tower, which got my hopes up for a story - but no, the name was given much later, when the tower features in 'Don Quixote.'

In medieval times, the words Moor and Saracen were used, rather than Muslim, but the faith was implicit in those terms and explicit in the architecture of what became known as the Palace of Joy. This beautiful mihrab, a niche in the wall, was a focus for prayer in the same way as an altar in a Christian church.
Calligraphy had symbolic and religious importance equal to images in Christian churches, and quotations from the Koran were used as decor and inspiration. Just as medieval Christian scribes sometimes doodled marginalia in illuminated manuscripts, so did Moorish architects indulge in tongue-in-cheek comments chiselled in alabaster such as, 'Have you seen any mistakes?' as well as the more conventional, 'Allah be blessed.'

The gardens of paradise are easier to imagine when you have visited earthly ones, with fruit trees and patterned paving. As in the Moorish gardens of the Alhambra, the water channels are carved in straight lines, ending in gentle water features, spouts and small fountains. In Moorish tradition, the water should bubble in the background and encourage meditation, not explode in high fountains Versailles-fashion.
Malik would have eaten the fruit (oranges nowadays) in the gardens, run his fingers through the flowing water and washed his hands in preparation for prayer. He would have peeked through the windows and arches, watched the gatherings of learned Jews and Moors, heard the poetry, music and debates. Famous for its culture and sophistication, the Aljaferia was known as The Palace of Joy, from lines composed by one of its Moorish kings, Abú Yafar of the Banu Hud:-
O palace of joy! O hall of gold!
You embody my aspirations.

Historians might disagree about how happily Christians and Jews lived under Muslim rule in 12th century Spain but there is general consensus now that they socialised and traded together, and were all allowed to worship in their own faith. Christians and Jews paid a tax for the privilege. The city boasted a mosque, a synagogue and a church. What is now the Basilica of Our Lady of the Pillar was then only a small chapel, but it contained the same wooden Madonna on her jasper pillar (dating from the 1st century) and is believed to be the oldest church dedicated to Mary.

Stone does speak. The keyhole/horseshoe arches 'typical' of Muslim Spain in fact developed from an architectural feature used previously by the (Christian) Visigoths.

The ceiling decoration of the Muslim palace was replicated in the extension to the Aljaferia built by the Roman Catholic Kings who occupied it later, even to the repeated image of the pine cone and other Moorish symbols.
To build the cathedrals and churches to the glory of their god, these Christian kings employed Muslim architects and, whether you believe in any God or not, the glory of Moorish style in Christian Spain is undeniable. This is what gained World Heritage status for Zaragoza's medieval buildings; the combined vision of Christians, Muslims and Jews, expressed in stone and plaster. Examples of inter-faith collaboration are everywhere.
So how did that little boy lose his kingdom? Did crusading Christians destroy his family and his home? Far from it. Militant Muslims fresh from Africa swept through Spain, attacking the residents who had grown 'too tolerant', 'too integrated'. The Banu-hud could not hold their fortress against the the extremist Muslims and in 1110 CE, the Almoravids took the Taifa of Zaragoza for themselves, only to lose it eight years later to the Christian King of Aragon, Alfonso the Battler.

The real twist in the story is that the Moors who chose to stay in the new Christian Kingdom of Aragon were offered work, not just as architects and builders, not just as tradespeople, but as generals and soldiers for the King of Aragon. The Banu Hud were no longer kings but they still wielded power in the Iberian Peninsula.

Such alliances were not new. Little Malik's grandfather fought alongside the grandfather of Aliénor (Eleanor) of Aquitaine and gave him a precious crystal vase, in token of friendship. The vase was given to Aliénor as a wedding present when she became Queen of France and can be seen today in the Louvre Museum.

Malik grew up to be a fictional character in my Troubadours series and I understand him so much better from seeing where he came from and what he lost. I know why he rode under Aragon's colours and was part of the political coup of the 12th century which united Barcelona and Aragon to form an unshakeable power in the north. Today, the city of Zaragoza is the capital of Aragon and hosts its Cortes (parliament) in the Aljaferia itself. I think that would make Malik smile.

I wonder what stories the local children are told about the palace as it was in days gone by. 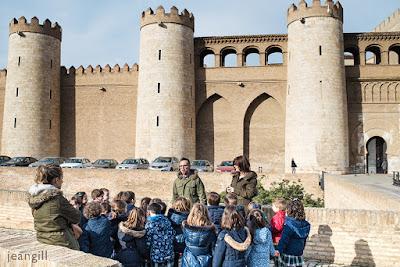 On the run from abuse, Estela wakes in a ditch with only her lute, her amazing voice, and a dagger hidden in her underskirt. Her talent finds a patron in Aliénor of Aquitaine and more than a music tutor in the Queen's finest troubadour and Commander of the Guard, Dragonetz los Pros.
Weary of war, Dragonetz uses Jewish money and Moorish expertise to build that most modern of inventions, a papermill, arousing the wrath of the Church. Their enemies gather, ready to light the political and religious powder-keg of medieval Narbonne.
Set in the period following the Second Crusade, Jean Gill's spellbinding romantic thrillers evoke medieval France with breathtaking accuracy. The characters leap off the page and include amazing women like Eleanor of Aquitaine and Ermengarda of Narbonne, who shaped history in battles and in bedchambers.
'One of the best historical novels I've read in a long time.' Paul Trembling, Dragonslayer