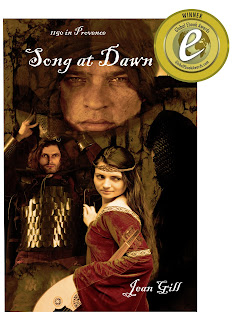 Book 1 in the Troubadours Series
1150 in Provence, where love and marriage are as divided as Christian and Muslim.
A historical thriller set in Narbonne just after the Second Crusade. On the run from abuse, Estela wakes in a ditch with only her lute, her amazing voice, and a dagger hidden in her petticoats. Her talent finds a patron in Alienor of Aquitaine and more than a music tutor in the Queen's finest troubadour and Commander of the Guard, Dragonetz los Pros. Weary of war, Dragonetz uses Jewish money and Moorish expertise to build that most modern of inventions, a papermill, arousing the wrath of the Church. Their enemies gather, ready to light the political and religious powder-keg of medieval Narbonne

That's what I'm hoping for in the next 5 days, with 'Song at Dawn' free as a kindle and 3 print copies of 'Bladesong' on giveaway at goodreads. I'll update the Troubadours page on facebook with numbers of downloads each day, to see how close I get to the magic number of 1,000 new readers by Sunday night.

Nowadays, people collect free books without necessarily ever looking at them, let alone reading them, but here's hoping the one will lead to the other, and that reading Book1 will lead to reading Book 2.

This is the only book I've enrolled in amazon's exclusive program, and this is my first experiment with amazon's free days so I am curious as to how the whole process will work. I have given advance notices to book listing sites and considered what might work for me from Adele Ward's blog on going viral.

Giveaway ends March 23, 2013.
See the giveaway details at Goodreads.
Enter to win
Posted by Jean Gill at February 13, 2013 No comments:

Bestselling author is stalked by psychopathic reader, who stakes out the author's house and sets physical traps, which the writer narrowly escapes. Moral; fans can be nutters - writers beware!

Honest reader, who's written a negative review, is stalked online by psychopathic, self-published wannabe-writer, who pursues the hapless reviewer through blog and readers' groups. Moral; writers can be nutters - readers beware!

Unfortunately, the modern version is all too real, a consequence of the new publishing world in which writer and reader can tweet and pinterest. I've blogged already about the democratisation of the review; nowadays Fred Bloggs' review on amazon is as useful to an author's ranking, if not more so, as James Joyce's review in 'The Times Literary Supplement'. Ranking improves visibility; visibility leads to sales. Some writers are willing to do anything - and I mean anything! - to get ahead in the modern goldrush, hoping to become ebook millionaires. The short time I spent on Harper Collins authonomy site (and blogged about here) horrified me, not just by showing what the writers were willing to do, but also what publishers actively encourage as 'marketing'. Spam and gang bullying, multiple screen persona to review your own books - the seedy underbelly of self-promotion is like some kind of crazy presidential race, corrupting all who join in.

In the last week, I've come across two true stories of readers who've been harrassed by authors to such a degree that one made formal complaint to the website administration and the other has closed his blog completely to reviews. There has been no action from the website admin; instead, the reader is the one affected, avoiding contact.

Both these readers have cut off contact with writers and are adamant that self-published authors are more likely to bully readers if they don't like reviews than are conventionally published authors. Whether this is true or not, it is very bad press for self-published authors and I'm hoping this blog post will make writers think twice before chasing after a bad review. Just the thought of a writer bullying a reader and challenging his freedom of speech makes me very angry! So much more angry than a bad review of one of my books would make me!

The bullies won't take any notice but there are writers being sucked into this marketing craziness, who don't mean to cause the upset they do; these are the writers I'd like to reach. Please don't contact someone who's given you a bad review. You won't change the review; you will lose the reviewer, and not just for your own books.

Remember that any review is better than none; I just read some interesting data suggesting that readers like to see a few reviews for a book. They feel comfortable buying such a book, even if the reviews are negative. If the reviews are controversial as well as negative - great! That's called publicity! You can make mileage out of it and quote negative reviews - elsewhere, and not in an attack on the reviewer.

Over the last fortnight, I've had my first experience of tweeted reviews on one of my books. I was lucky and 'Song at Dawn' found a reader who loved the book, so it was a pleasure to read the tweets. However, I did wonder how I would have felt if the tweets had been negative. It would have hurt, for sure, and I wouldn't have re-tweeted! But I can't even imagine 'going after' the reviewer! The freedom to be critical is what makes praise valuable; one without the other is meaningless.

Not only was it a pleasure to read the 'Song' review tweets, it was an education. There is a world of fanfiction out there that I know nothing about. Thanks to a lot of work by one reader, there is now a fun page of TVTropes about 'Song at Dawn' and I am amazed at how much fun people can have with books - and should have with books. If this particular reader had been put off self-published books by badly-behaved writers, none of this fun would have happened.