Part 3 of our dog adoption


All happy dogs have many nicknames and our Big Bad Lou is no exception. I wasn't worried about his ancestry, thinking him to be what a French friend calls 'a Crusader dog'  and what we used to call 'Heinz varieties' (from the soup advert offering 57 varieties) but then the same French friend told me that Lou looked very much like the old-fashioned Briard from which he is supposedly a cross-breed. What I found out about the breed fits Lou to an L.

Briards are also known as Bouviers de Flandres, Belgian in origin, and were known in more familiar terms as
koehond (cow dog), toucheur de boeuf or pic (cattle driver), and - my favourite - vuilbaard (dirty beard),  No prizes for guessing the origin of this nickname and because Lou's beard is bleached and aged a reddish-brown, and he has a certain presence, 'Barbarossa' was inevitable. Despite the nicknames, Briards have a noble history; Charlemagne, Napoleon and Thomas Jefferson are among the famous afficionados of the breed.

In both World Wars, Briards were the war dogs used by the French. almost to exctinction. They carried messages, searched for wounded soldiers and were commemorated in awards and sculptures (neither of which would have meant as much to them as a game of hide-and-seek with their masters). They are apparently dominant dogs but as my breed of choice for 20 years has been the Great Pyrenees, I wouldn't notice!

Lou seems happy with all his names and his training has progressed so that he now looks me in the eyes, knowing that I  want him to. How does he know? Because every time he looks towards me, or actually catches my eye, and I notice, I tell him how beautiful he is. Some trainers believe you should behave like a dog, avoiding eye contact, and they are right that an unknown dog will consider eye contact to be a threat, but my dogs know that I am not a dog. They trust me and it is beautiful when we look into each other's eyes. It is not challenging (although I've had that too, from previous dogs!)

I can't yet get this contact on walks as Lou still has what I call crazy-escapee syndrome, even though he doesn't pull now. He does behave as if he's just escaped from the shelter and has to make the most of his 5 minutes of freedom. So I'm working on this, the same way I've worked on contact in the house and garden - with compliments.


It's just as well that Lou trusts me as we've visited the vet once a week since he arrived here, sometimes without him lifting a leg on her cabinet but always with the intention to do so. The score so far is Lou 3; Jean 4. Dogs with floppy ears are prone to dirty and infected ears, and although I've cleared up the big infection, Lou still has some dirt deep in the ear canal (according to the vet), and hairy ear interiors, so I'm looking at natural ways of regularly cleansing the ears, without poking objects such as cotton buds into them (too dangerous). At the moment I've settled on olive oil, alternating with vinegar/sterilised water on a separate occasion, injected carefully with a small syringe, massaged and any debris swabbed out with gauze. Once a week with the olive oil, which Lou likes, and once a week with the vinegar mix, which he doesn't mind.

In addition to his ear infection, Lou's had a split callus on his elbow, that was being licked into something nasty. How ironic that after 2 years on concrete, summer weather on ceramic tiled floors seems to have done the damage. I've seen how quickly skin problems can turn to a putrid nightmare in our summer heat, traumatising dog and owner, but Lou has healed quickly with only natural medication - thank goodness. The side- and long-term effects of Cortizone and antibiotics can be as much of a nightmare as the initial skin problem. Lou did have to wear a collar and he wasn't pleased. 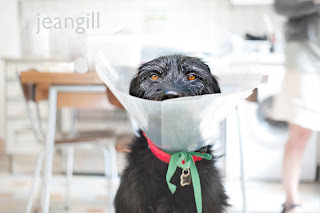 However, the rewards of virtue followed quickly, and we took him and Blanche for a swim in our special place - clean and quiet. I vowed I would get him shiny and I think I'm getting there. 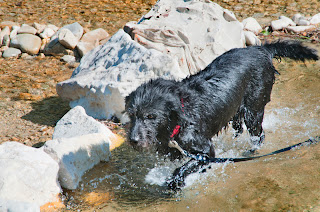 Even a clean river here can spark skin problems so our latest gadget is a solar-heated outdoor shower for summer fun and dog practicalities. Lou is about as keen on water-from-above as he is on wearing a collar but he is a natural in front of the camera so he did a turn while everyone else fooled around with the shower. 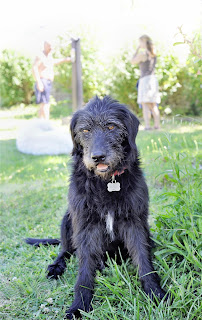 He has now started his modelling career for stock photos and is a real star. This was supposed to be 'the training class' but he and Blanche are more interested in each other than in the supposed training - too true to life! 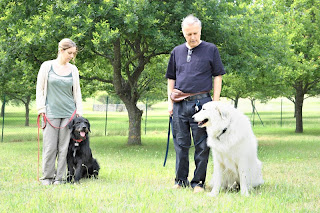 I wasn't going to blog about Lou again as the adoption is too easy to be interesting (!) but my stepdaughter (in the photo above) is not the only one who's fallen in love with him so I promised I'd post news and photos from time to time. This is already my favourite photo of the summer and friends have suggested I've invented a new sport - water-dog-ski. For me, it's a photo of happiness, of the summer Lou came. 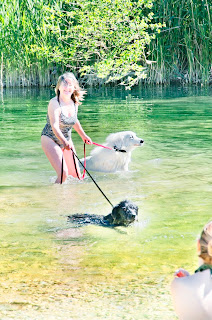