Have you ever wondered about narrating an audiobook?

If you read my 2012 blog about my experience as an author-narrator you already know why authors can be the worst narrators of our own books! And why choosing the right narrator is so important. The moment I heard Ian's submission for Someone To Look Up To, I knew I'd found the voice of Sirius and, since publication three weeks ago, listeners are agreeing with me. So who is the man behind Walker's Words? And what's the inside story on being a Voice? 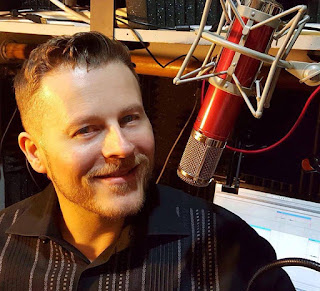 Ian M. Walker is a Brit living in Los Angeles who broke the shackles of many years in the corporate I.T. world to follow a more creative dream. He is known for 5* audiobook narration in his 'deep, gravelly voice'. He has an upcoming part in a stop-motion film, upcoming animation narration, completed Orcish feast voices and ambience for an upcoming role-playing game by World Tree Studios.

As Ian is a Voice, he decided to answer my questions live for you, on video, so you could see him working and so he could expand on his answers. You can enjoy the full version of Ian's interview here and I can only say that I was moved to tears by the end of it - good tears.

Welcome to my blog, Ian!


Tell me a bit about yourself - where do you live and what do you do when you’re not recording a book?
Originally from England, I live in Los Angeles, CA. I’ve actually now been over here for longer than I lived in the country of my birth! When not recording I’m usually playing with my dog, Bailey, reading, swimming, playing a computer game or visiting friends.

Can you give me a brief picture of your personal journey as a Voice Actor?
After a long career in I.T. and one too many lay-offs, I started to put serious thought into what I actually wanted to do when I grow up. I.T. had been good to me but it never fulfilled me. I did some traveling and during that time, I came across an ad for a voice assessment. I went along, heard myself recorded in a professional booth for the first time and a fire was lit in my belly. I just completed my fourth complete audiobook and I’m working on the fifth. I may also be voicing Einstein the English Elephant in an independent stop-motion film. Since elephants have always been my favourite animal, that would be fun. I definitely intend to do some voice work for gaming.

How do you prepare for recording an audiobook?
Initially, I read the book. I try to just enjoy it as a reader would but, of course, I’m already starting to think of the voices. I’ll speak with the author in case they have input or I need to clarify anything such as words, accents, etc. When it comes time to record, it varies. Sometimes, the voice(s) will just come to me. With others, I may try a few out and see which I prefer. If there are a great many voices I’ll usually record snippets which I may refer back to.

Do you network with other Voice Actors? Are there any sites you’d recommend?
Absolutely! I have quite a few peers I’m connected with via social media. There are a great many voice groups out there so I’d rather not favour any single one. One thing I would mention, though, is that I’ve always found these groups and my peers to be very helpful. I heard early on that, unlike other areas of the entertainment industry, voice is less cut-throat and more about lifting one another up. So far, I’ve found this to be the case.

How can an author help the Voice Actor/ Producer of his/her book?
Hmm, an interesting question. Though I don’t have a great deal of personal experience yet, from what I’ve read some authors can be quite hands-on whilst others leave it to the Narrator. Usually, though, this IS a partnership so there ought to be some discussion. Steering clear of too much description of tone/flavor would be helpful as it isn’t always easy to understand exactly what the author was going for. One thing which would be nice, though it is likely not feasible, is if the author could consider, when writing, just how long a sentence they are writing (without any pauses) and how that might affect the poor narrator as they attempt to voice it without expiring. 😉
Hahaha. Guilty as charged!

Are there ways in which authors can hinder or even spoil the Voice Actor’s recording of a book?
Micro-management. Changing their minds causing many re-records.
If you could wave a magic wand and change something about your career what would it be?
I’d be a little further along. More established. More known. Because, hopefully, such a position lessens the bane of all creative types – the weakening of self-confidence/belief in oneself.
That is exactly how I feel! You say more about this in the video and I can identify with all of it!

Tell me about your working day. Do you work to a routine? Do you use a recording studio? Endless cups of coffee or tea?
I have an audio booth I created out of a large (5' x 5' x 8') closet. It has walls treated with Auralex acoustic tiles, thick carpet, etc. Despite being from England, I never had the endless cups of tea habit and now, I rarely drink it or coffee. I’m always drinking water. I always have, thankfully.

I always warm up. First, I’ll do some singing along to music as I’m checking emails and what not, then I’ll follow the routine of a friend and peer, Amy Walker (no relation) immediately prior to any recording session. Try the routine yourself!

Who or what has been the greatest help to you as a Voice Actor?The helpful people of the forum for the free software I mainly use (Audacity) and of the ACX Facebook group.
What has been the hardest thing for you to overcome in becoming a Voice Actor?
Lack of self-confidence. This hit me hard over the past year or so due to some personal challenges/events which had nothing to do with my voice work.

If you could pick one character in one of your audiobooks, to spend some time with, who would it be and why?
I can’t give just one, it has to be two. 😊 First of all, Sirius from Someone To Look Up To by an author you may know because I love dogs and I feel I got to know him so well so I’d love to meet him. Secondly, Gon from The Oldest Living Vampire series by Joseph Duncan because - come on! - he is 30,000 years old! How fascinating that would be.

Tell me about your latest audiobook and why we should all buy it?
My first three books are all of a supernatural bent. This is fine for me as my favourite genres are sci-fi and horror. Of course, this isn’t a realm all readers enjoy. Due to this, plus having to overcome the aforementioned challenges to finish this book, Someone To Look Up To is something I’m going to cherish dearly. It is a book which appeals universally and one which became a crucible of sorts for me.

Beyond my very personal reasons, it truly is wonderfully written. There were times I would come out of the booth, interact with my own dog, Bailey and I’d find myself looking at her differently, even asking her if she was doing what I had just read about. I had to keep on reminding myself that this was a book of fiction, not fact! It takes one into the psyche and thoughts of a dog so well. 😊


Thank you, Ian. Your narration brought my book alive for me and I loved every moment. Readers can listen to Ian reading Chapter 2 of the audiobook here and judge for themselves how Ian 'became the voice of Sirius, and made Sirius and the others feel so real'. (5* review)


What are you working on next?I have already started on the next in the Oldest Living Vampire series. After that, though, I’m going to try to spread my wings a little. I’d like to go for some computer game or commercial work and perhaps one or two non-fiction audiobooks.

Where can we find you?
The easiest way is via my website,  as it has links to all of my social media. 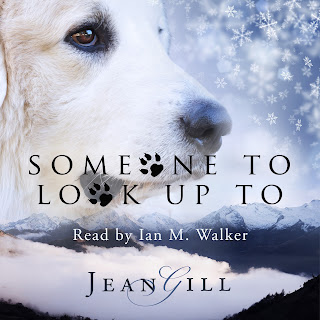 You can buy Someone To Look Up To audiobook FREE to new audible members from
Audible (US)
Audible (UK)
Amazon (US) Amazon (UK) iTunes: The book is available from bookstores