Sirius - adventures of a dog book 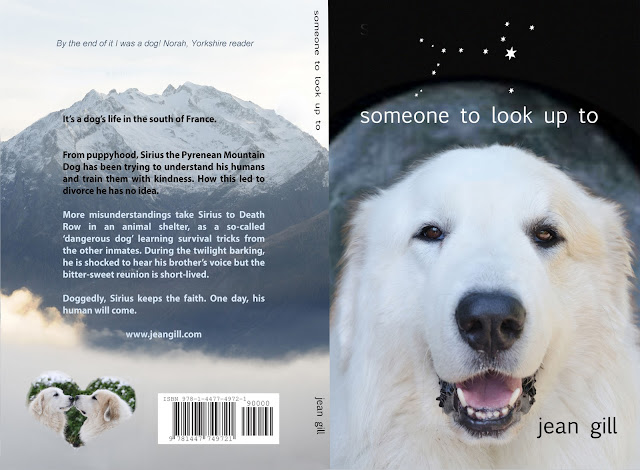 A year after publication, Sirius is marking his territory a long way from home, as befits a Pyrenean Mountain dog. The Pyrenean Club of Great Britain has the book in stock and on their Christmas list for anyone seeking presents for the dog-minded.

The book made it to the breed's most prestigious dog show, the N.E. d'Elevage at Argelès-Gazost, run by the French Pyrenean Club,  the RACP and the Club Secretary chose it as his 'coup de coeur' (pick of the month) from the Club boutique . A French translation is under way and I'm being nagged as to when that will be finished. I'll keep you posted!

The dog on the front jacket is my own Bételgeuse de la Plaine d'Astrée and it is wonderful and terrible for me to know that his beautiful face was seen by the 400+ visitors to Argelès. That makes him a show winner of a sort, forever I hope. It is terrible for me because he had health problems as a puppy, and came through them only to run out of time at only 4 years old, just after the book was published. It is wonderful because he IS still a force to be reckoned with, because of the novel, and some of the character of Sirius came from my experience with Bétel. My husband said 'he had a big heart and he changed us.'

Those of you who photograph dogs will know how difficult it is to stick a camera in front of them and get 'that look' in their eyes but Bétel never saw the camera; he only saw me and he never lost faith in me for one second.

A cameo on the back cover shows a magic moment between Bétel and his partner in crime, Blanche-Neige de Néouvielle, who contributed a lot to the character of Snow in the novel; feisty, proud and beautiful, more interested in rough-and-tumble than soppy stuff. Since we lost Bétel, Blanche and I still play the games he invented, which include ice-cubes as aperos and jumping out from behind a hedge.

It looks as if this image might be chosen to represent the breed, patous as we call them, on the T-shirt planned for a French forum of patou afficionados I think this is probably the best photo I've ever taken and the full version is for sale in my istockportfolio Those of you who know dogs will know that this is a split second moment just before the two dogs start playing again, tearing round in the snow like total lunatics. 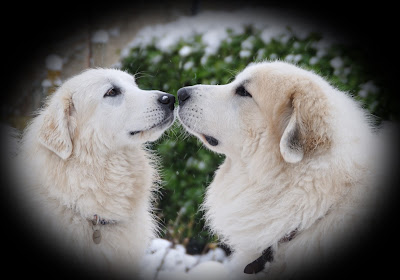 Many real dogs and true stories contributed to the story of Sirius but the spark that lit my imagination was one particular dog advertised a few years ago on the French site for breed rescue I won't give the story away but he really did go through what Sirius goes through, from the moment he is back with his breeder, and he never did lose faith that his human would come. I know this because of his reaction when a human - from the rescue organisation - did visit him to assess whether he was suitable for adoption.

Everything in 'Someone to look up to' is based on a true story and I know thousands of true stories because of my work with dog trainer Michel Hasbrouck and my chat on French doggy Forums.

The best feedback I've had so far was from the Yorkshire reader who said 'By the time I finished it, I was a dog! When the postman called I felt the urge to bark,' and from the reader who identified with Elodie enough to 'suivre son étoile' as they say in France, 'follow her dream', and become a dog trainer - or rather a trainer of people with dogs.

If you would like to rate 'Someone to look up to' , or write and share a review on any other book you've read, join goodreads

'Someone to look up to' was first published by Callio Press July 2010 but as this publisher is no longer in business, the book is now published by lulu and is also available in print or kindle from your nearest amazon
uk       com      fr
and in all ebook formats

Follow this blog
Posted by Jean Gill at November 03, 2011