I mentioned dog trainer Michel Hasbrouck in my last post. How we ended up working together is an amazing story of Internet connections (of the human kind) and of the friendships that come from them.

When I was looking for a Pyrenean puppy and new to the French dog scene, having previously been owned by four Pyreneans in the UK, I joined a French Forum where breeders, owners and lovers of patous, talked dog. There I met 'Stratos', who combined an outrageous and cutting sense of humour with an underlying passion for dogs and their training. As an online sparring partner, Vincent (his real name) was fun; as a helpline on dog behaviour, he was a godsend to many Forum friends. His own knowledge was based on the huge problems he'd had with his Stratos.

When Vincent's beautiful Pyrenean puppy of 3 months was left with a neighbour for an hour or two, while Vincent went shopping, something happened. When Vincent came to get his puppy, the neighbour told him 'That'll teach him not to pee in the house' and from that day Vincent had a puppy so aggressive that everyone, including dog trainers he consulted, said that he had to accept the inevitable and have Stratos put down. Vincent's guess from the body language of the man and the dog was that the neighbour had slammed the puppy against the wall. Bear in mind that a male Pyr of 5 months weighs about 25kgs and keeps growing to 60/70/80kgs - even a very young dog can be seriously dangerous when turned agressive. Vincent didn't give up, remembered a chance meeting with a dog trainer, took Stratos to Michel Hasbrouck and saved him. He also made it his mission to publicise Michel's work and so, because I was trying to improve my knowledge of dog training before I started again with a puppy, Vincent recommended 'Dressage Tendresse' to me.

I read the book, was amazed at how much clicked into place with what I'd figured out from experience but never expressed, and also at how much I'd got wrong and could put right. There were so many mantras that went into my head and stuck there. 'No hitting, no shouting.' Guilty of both in the past but no longer. 'No dog is irrecuperable'. I'm sure you too have friends who have put dogs down for aggression, unable to find a way out of the impasse. In the past I would have had to do the same in their shoes but now I have enough technique, and professional support available, that I am confident it will never happen to me with any dog of mine. But of all Michel's pronouncements the one I still love the best is 'Ignore a dog and he does what he likes.' So much dog training theory is based round 'ignore him' as a punishment, I wonder if these trainers (or comportmentalists, as is the trendy name) have ever met the sort of dog who destroys everything to get attention, including his owner. Or the dogs who find their owners boring because they are being ignored, and who bound off to find something more rewarding to do than hang around said owner.

I love it when someone writes to me to say he/she liked one of my books so I mailed Michel to say just that and asked whether he knew of such a book in English, for my friends to read. He said 'Translate mine for me' So I did, as 'Gentle Dog Training'. And I found the ideal publisher with Souvenir Press, which had previously published John Fisher and supported all Michel's principles of dog training. I only wish our publishing contract had been directly with Souvenir Press but as Michel had a contract with his French publisher, all dealings for translation rights were between the two publishers.

I finally chose my breeders for my two Pyrenean puppies, was thrown off the Forum for choosing badly (according to the breeder who ran the Forum) and a group of us started the Patou Parle Forum, which has lasted 5 years now, with the usual ups and downs of rivalries and friendships, but with an underlying respect for people's right to disagree - and to buy puppies or adopt dogs, wherever they choose.

I duly went on a 2 day training course with Michel at his base in Switzerland, when my Blanche-Neige was a 3 month puppy . There is no substitute for practical work on the terrain with a dogmaster and Michel is looking for people to train up and add to his team, especially English speakers who can spread the message about his training methods. If you're interested contact him at michel@hasbrouck.com

I've progressed since then. I would never have coped with Bétel's problems without all I learned from Michel. A mixture of health problems and maltreatment from a kennels owner, when the dogs were 8 months old and I left them there for 4 days, gave us a 70kg dog who was aggressive towards vets and strangers. Strange how history repeats itself. Like Vincen with Stratos, we worked him back to his real nature and kept him safe.

This year I decided to continue my own training with Michel and spent another few days in Switzerland, always learning more. He plans to retire in the near future and wants to pass on all he has learned to the next generation of dog trainers. I think I've lived too many careers to start another as a dog trainer but what I am learning will at least benefit my own dogs, and I have not lost the urge to take it further again, and be able to train someone else's dog. When you've seen the tears in clients' eyes because they've found the dog they've always wanted, right beside them, and they now have the technique to build on this behaviour, there is no better reward for work.

Vincent and I passed 6 years chatting dog online. I still have the stories he sent me of his own dogs and he planned to write novels and train as a dogmaster, once they had found a lung transplant for him. More than a year ago he was forced to stop his work making dental prostheses - work he loved. He was confined to one room and breathing aids but he kept in touch with his Forum friends when he could. He had my books in the room with him even though his English was not good. He knew 'Dressage Tendresse' off by heart so he used that as a practice side-by-side with my translation, to help him read 'Someone to look up to'. Vincent gave me permission to use his true stories in my novel - of the newfoundland who taught the patou to swim, and saved an unwilling fisherman by towing his boat along - and to use the name Stratos for Sirius' brother. Both Vincent and I had a sense of 'There but for the grace of God, might have gone the real Stratos.' Only it wasn't God who saved the real Stratos, but a master strong enough to seek help, and a dog trainer with enough real technique to give it.

His health never stabilised enough for the transplant to take place and Vincent died in June, optimistic and full of plans for the future until the last few days. It's hard to believe he's not there any more, about to jump in with a provocative remark, a quote in ancient Greek or exactly the right advice for someone whose puppy is chewing his master's hands to shreds. Online friendships can turn to real friendships, a casual word is a pebble dropped in a pool, and you never know where the ripples will spread. Without Vincent, I wouldn't have met Michel; if I hadn't worked with Michel, I'd never have coped with Bétel's problems. And I know for certain, from readers telling me so,  that other dogs' lives have been saved by reading 'Gentle Dog Training.'  That makes me feel good. And it made Vincent feel good too.

What was it that E.M.Forster said? 'Only connect'. 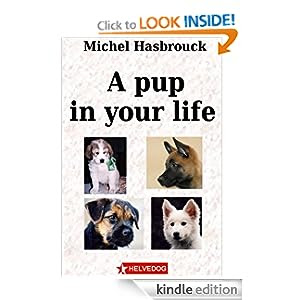 The puppy top left on the cover of 'A Pup in Your Life' is Vincent's photo of his first patou, José. Michel and I have published this book, a companion to 'Gentle Dog Training,  as kindle .com,   kindle.uk   pdf

We did try audio-book, with me reading the text. Believe me, it was hard trying to do a deep, sexy voice while reading 'If your puppy has worms...' but some people think I managed it. Sadly, the Internet seems to have exploded with excitement over this particular version and I don't know whether Michel will rescue the remnants. It would make an interesting found poem but I am NOT recording it all again!


TO BUY THESE DOG TRAINING BOOKS