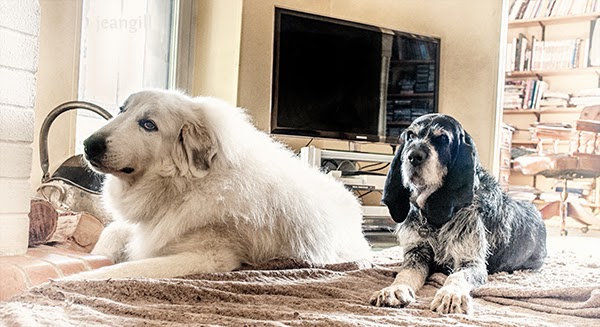 I suppose it was inevitable that within minutes of us renaming our adopted dog 'Sherlock', my husband (a big 'Airplane' fan) said, 'Of course, we'll call him Shirley.' Sherlock/ Sherl/ Sherley/ G'boy seems very happy with his new names and life. He has a tail like a cat's and it's usually waving that little white hook at the end high in the air. His hind-quarters have completely regained muscle tone and a bum doubled in size suits him better than it does me; ditto the extra 5kg he gained gradually after he came to us. Read Part 1 of Sherlock's story


Sherlock is a griffon bleu de Gascogne, a Gascony Griffon, bred for hunting, abandoned with no ID. My suspicions that he was thrown out by his hunter-owner have been backed up by his behaviour. When we opened a bottle of Clairette (the local sparkling wine), the cork popping sent Sherlock into nervous running round. Purely in the interests of dog-training, we made sure he heard the sound frequently and he has grown used to it over the last eight months but this is not a dog who will cope with gunshots. He's scared when the hunters go past in their SUVs, hounds barking and trailers clattering. Nose glued to the ground as always and ears trailing, he didn't even see the pheasant that pottered into the woods on one of our forest walks. I suspect that he has the nose but not the temperament; or that a hunting accident traumatised him.

I do know that he was treated badly. He no longer flinches when I stroke him unexpectedly and he's no longer afraid if I'm cross (usually with Blanche and he worries on her behalf). He knows there's no hitting here and his confidence grows all the time. Yesterday was a big day; he looked me in the eyes and, for the first time, licked my nose. He seeks caresses now without fearing reprisals. In fact, he'll push Blanche aside to get his share and she's so sure of herself (and of me) that she doesn't mind. It wasn't safe for him to show his feelings and he is a reserved dog, who is taking the risk of expressing himself more and more.

He is also deeply stubborn. He might have been beaten but he wasn't broken. I see it when Blanche plays dominance games. She is so much bigger that he can't avoid being jumped on but he doesn't buckle and he doesn't give in. He endures it. I suspect his previous training involved commands, stubborn refusal and then him being hit. The shelter reinforced recall as a bad thing (back into the cage if you came when called). That has changed completely with positive training but he still wavers sometimes at the final moment in recall. There's a lot of harm to unlearn. And he has no idea what play means. So motivation has to be praise, cuddles, need to be with me or occasional cheese cubes.
I get funny looks when Sherlock is with me. One man waiting with me at the vet's told me he used to have a bleu de Gascogne. The dog got nicknamed 'Inox' the French name for a metallic pan-scraper, because the wire-haired coat is so harsh. The breed website shows a photo of owners; rows of men with guns and Sherlock-dogs.

Everyone knows that it is a bad idea to adopt a hunting dog. Why, I wondered, having adopted a hunting dog. A French friend told me, 'They escape. They run away all the time.' This was not good news. Escaping dogs die. The very next day, I found Sherlock outside the garden fence, running around the terrain that is open to a busy road. A lump in my throat, I called him back in. Blanche hadn't followed him - that time. John and I checked the fence, argued, blocked the hole that hadn't been there before, feared the worst.

It happened again. I watched where Sherlock went when he was back on the inside, found the new hole. Heavy-hearted, I told John. It was a bad day. We both know from bitter experience what a determined escaper can be like and how dangerous it is. Gritting his teeth, John looked at the fence again. And then looked around inside the big garden. And saw what Sherlock had been trying to tell us all along, looking through the fence, pointing gun-dog style. Wild boar excrement. The holes had been made by wild boar coming down from the woods into the garden. All Sherlock had done was go through the hole and check out his outer territory - and then come home.

When strimming the grass outside the fence, someone had cut through the tension wire at the bottom and that was all it took to allow piggy diggings and a break-in. Acorns and worms in damp soil all attract the boar. Luckily a strand of barbed wire along the bottom of the fence outside stopped the nocturnal invasions - big thanks to the Welsh friend who gave me that tip.

Sherlock has made NO escape attempts so another myth can be exploded; hunting dogs don't all want to run away.

Apart from the nose-lick, yesterday was a big day for another reason; vaccinations and health check. It's good news. The way I'm treating Sherlock's ears is working so although they are dirty and need wiped regularly, the regime of a week's Zymox, then a break, has prevented any return of infection and can be carried on forever. No talk of operations, nor even of antibiotics. One healthy, shiny, happy dog.  My vet has remained impassive in the past while I've sobbed all over her consulting-room but this time she cracked completely, in a good way. Yesterday, she stroked Sherlock and we agreed that he wasn't the sort of dog who'd attract potential owners but that he was beautiful, 'well-proportioned'. She told me, 'I love this dog. There is something peaceful about him.' The word she used was 'reposant', which carries the sense of 'makes me feel peaceful.' Yes, 'reposant' is a good word. 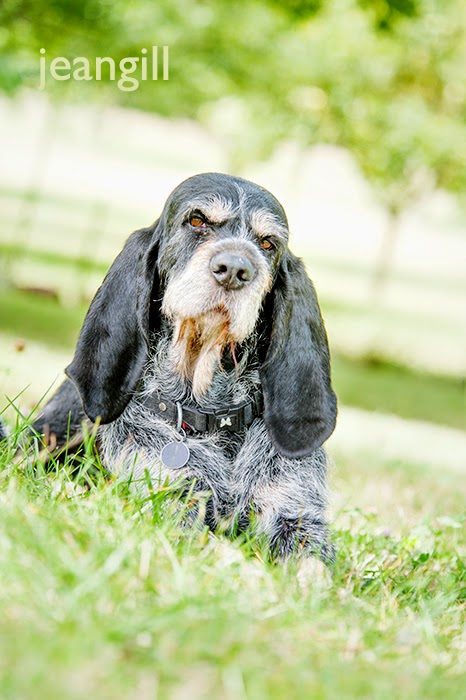