He had me at 'Ruff!' Online dog dating.

The 'Ruff!' part is poetic license as Balou hasn't actually barked in my hearing yet so I don't know what he sounds like - no doubt only one of the surprises in store now that we've adopted a dog. It happened like this... 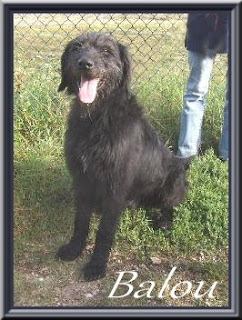 I read obsessively keep an eye on the French Forum for the Adoption of Big Dogs, telling myself I might be able to offer helpful advice or connect people, that I'm not in any way shopping for a dog, that I'm not a sucker for all those stories of heartbreak and hope. Having worked with a dog trainer (Michel Hasbrouck) I know the dangers of pity, of seeking sainthood via pooches, of bringing home a dog riddled with disease and raging against the universe - instead of adopting his quiet friend.

Which is why I fell madly in love made a totally rational decision when choosing a companion for my Great Pyrenees, Blanche, for me and for my long-suffering husband. It's no secret that I've wanted a second dog for some time but L-S.H. liked the advantages of having only one. I miss dog-dog interaction. I miss the games and I even miss dog dialogue; 'It's my couch.. no, it's mine.. mine... mine..' ending with whoever's bigger/smarter claiming the disputed territory/object.

Finding a dog through a website is a form of online dating and increasingly important in placing shelter animals. Some refuges are Internet-savvy, with professional photos of each inmate; others are suspicious of any contact via a computer and usually too busy to answer a telephone. 'Come and see the dog,' is all the answer you get to your questions about background and character.

I was lucky. I was only trying to get more detail about Balou, to help find him a home, as I thought he had a cute face. Yes, photos/appearances make the first impression and some dogs just appeal to you more than others. Separately, two shelter workers gave me more information about Balou, not realising that I was interested for myself (unsurprising as I didn't realise this either). Both people said that this Briard-cross had 'a character of gold', the French idiom that I would translate as 'a sterling character' (interesting aside on national currencies and character descriptions). In any language, he's considered a cutie-pie.  He gets on with people and with other dogs. But the words that etched themselves into my brain were these (I translate):-

'He is one of those dogs we nickname 'the invisible ones'. People never notice them. Because he's black? Black is out of fashion and no-one wants a black dog. And yet he has so many great qualities.'

Balou has been in a shelter for two years and not one person has even looked at him. He was abandoned due to divorce, losing his family, including the children he loved (according to the couple who left him at the shelter).  His friend the German Shepherd was abandoned with him but found a home straight away. Balou has lived with different dogs since then; they come, they find a home and they go.

Apparently, L-S.H. was tired of seeing a dog's face on my computer screen every time he looked, and said 'Yes'. We went to see Balou on Wednesday, taking Blanche with us so that we could have the first meeting on neutral ground and judge the two dogs' reactions.

We walked them on lead and one training need was clear straight away - Balou pulls like hell.The dogs ignored each other and Balou even ignored another refuge dog playing macho on the opposite side of the road. Then we let the dogs loose on some enclosed ground.


Balou and Blanche Sniffing together
Invitation to play 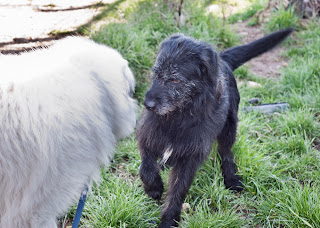 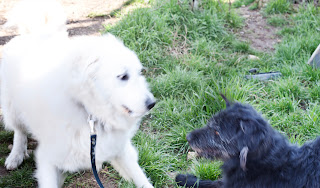 Balou wasn't interested in us but that's often the case in shelter dogs, especially with strangers. Part of the training work ahead is to make a relationship with an adult dog. However, he was confident with us, didn't mind being stroked, even on his head (a dominant gesture to a dog so should never be the first approach) and his eyes are full of warmth and fun, despite two years in a shelter. The introduction couldn't have gone better and I can't wait for the 6th May when we can pick up Balou and bring him home. We already had holidays booked and I'd rather he stays in the refuge with people he knows than go to a kennels.

Inevitably there are memories of Bétel, the friend we lost three years ago. No-one can replace him but there is room in our life and hearts for Balou. It seems fitting that my book 'Someone to Look Up To', with Bétel's beautiful face on the cover, is now in amazon uk's top 100 kindle dog books and I was wondering how Balou would fit into the characters living in the refuge, described in the mid-section of the book. Prince maybe? The 5 year old black dog? Or perhaps Sirius himself, in character not in looks, the dog who 'kept the faith.'
Extract from 'Someone to Look Up To'
The dogs in the animal shelter are telling their stories at twilight. Prince, a 5 year old black mongrel takes his turn ...


‘From puppyhood to dog, I grew up with the two babies in my family. I made them smile by licking their feet when they were tiny and my master and mistress stopped them pulling my ears or poking my eyes when they were old enough to experiment on objects. My masters loved me, looked after me, walked me and the children together. We were one family. First Linda, then little Alice started school and every day my mistress and I would walk to meet them. I loved the sound of the children coming from the playground. And the sound of my master coming home from work. And the daytime with my mistress. She sang while she cleaned the house, cooked some food. She took me shopping with her or to visit friends. I can keep myself warm through the winter on my memories of my family. I am lucky.’
‘He is lucky,’ we howled.
‘They died. They went out in the car and they didn’t take me. They said, ‘Bye, Prince, see you soon.’ And they didn’t come back. There was an accident. The police said so when they came to my house where I was waiting for my family to come home. One said, ‘He’s a bit old.’ The other said, ‘No, he’s not old at all and he’s sweet. Give him a chance. He’d make a lovely family pet.’ And they brought me here.I will always love my family.’
‘He will always love his family,’ we echoed.
‘I can love another family too. My heart is big enough.’
‘He can love another family too.’
‘My new family will come.’
‘His new family will come.’ As Prince lay down, Maisie was standing up and I could swear she licked his face as she moved past him but as the clouds drifted past the moon, it could just have been a trick of the light. There was no trace of softness in her deep wrinkles as she gave voice.