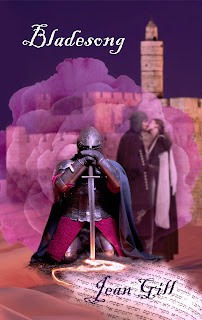 In print
In all ebook formats
In kindle format only

Available in print from amazon in March

Estela, the troubadour, following the destiny of
her beautiful voice, and Dragonetz, her passionate knight;
divided by the times they love in and fighting to be together.

Dragonetz is imprisoned in Damascus, his military prowess
as valuable and dangerous to the balance of power
as the priceless Torah he has to deliver to Jerusalem.

Can Estela get him out alive, despite Nur-ad-Din,
the Muslim Atabeg; Melisende, the Queen of Jerusalem;
and an avenger from the past?

Will she still want to,
when she knows what they’ve done to him?

'Song at Dawn', Bk 1 of the Troubadours' on free DL as kindle from February 13th (US Pacific time) until February 17th

Weds 30th January Launch party and NEWS of the Troubadours Books on Facebook - come and join us on on The Troubadours Facebook Page. Bring a bottle and post a message. Gatecrashers welcome. 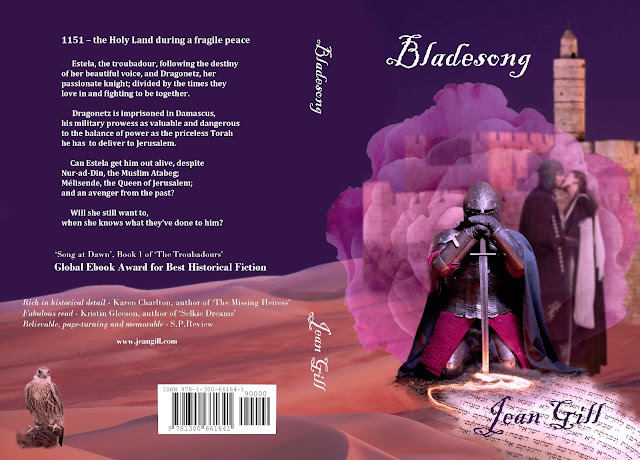 Extract from 'Bladesong', Chapter 6:-
Back in the Holy Land, Dragonetz re-lives events of the Second Crusade, trying to work out which of his enemies from the past is holding him captive now. In 1148, Dragonetz was a young knight, sworn vassal to Aliénor (Eleanor) of Aquitaine, trekking overland from Byzantium towards the Crusader State of Antioch. Aliénor, with her Commander Geoffroi de Rançon, is leading the vanguard of Frankish troops, with the baggage train in the middle and her husband Louis VII, King of France, bringing up the rear. Aliénor's party reaches one of the Crusade's infamous places, Mount Cadmus...

Although they were well into Seljuq territory, the day’s journey had gone without incident so far, and, at barely mid-day, they were already approaching the crest of Mount Cadmus, chosen for the night’s halt.
‘We pitch camp here for the night, my Lady.’ De Rançon steadied his grey beside her, snorts of steam showing the horses’ efforts on the climb.
Two sullen frown lines wrinkled Aliénor’s forehead. ‘That would be a waste of the time we’ve gained. Our scouts have reported a plateau but a few hours ahead, flat and fair, perfect for our camp. We should profit from our speed and continue. The heathens will never expect us to be upon them so soon and the element of surprise is worth ten thousand men.’


Before de Rançon could respond, de Maurienne pulled a face that would sour milk and abort sheep. ‘My King expressly instructed that we camp on Mount Cadmus for the night, where the goods-train and his own army will join us. Remember that the Germans were ambushed in this pass and we need to regroup as soon as we can.’
Twin points of hectic colour flared in Aliénor’s cheeks. ‘My husband,’ she emphasised the title, ‘has not seen the terrain here. Nor heard from scouts that all is clear. If he had, he would order this army to continue. The fact there was an ambush here three months ago means nothing! As the vanguard is under my orders, I command you, de Rançon, to continue with the day’s march!’


Dragonetz held his breath, in no position to intervene. The silence stretched.
‘Are you the Commander of my Guard or are you not, de Rançon?’ The ice in her tone was cutting, the threat clear.
‘At your service, my Lady,’ came the unequivocal reply. He was going to order them to march onwards.
‘No,’ shouted Dragonetz, jumping off his horse, clutching Aliénor’s bridle and stopping them all in their tracks. She glared at him.
‘You overstep yourself, my Lord Dragonetz. Be careful what you say next lest I find I have a traitor in my Guard.’
‘Dragonetz,’ warned de Rançon.


There was no going back and Dragonetz hoped wholeheartedly that there would be no going forward. ‘No,’ he repeated, more quietly, but the words still tumbled over themselves. Months of hearing bad advice leading to bad decisions welled up and poured out into this one attempt to stop lunacy. ‘My lady, if we continue, we are opening up the baggage train to attack. We cannot abandon them like this! The Seljuqs could be anywhere in these mountains. Those behind us will be slower, losing more and more distance from us, splitting up our army and making each section more vulnerable. Our horses need rest and our men must rally their strength in case they are called upon to fight. Our gains will show if we need to act in our defence.’


De Rançon leant down from the saddle and struck Dragonetz across the cheek with his glove, drawing blood. ‘You weren’t asked to speak.’


Aliénor held up her hand, stopping de Rançon from striking again. ‘He means well,’ she observed dispassionately. ‘We need men who care enough  to speak out.’ Dragonetz’ hopes rose. ‘Even when they’re wrong. There has been no sign of these Seljuqs who are supposed to be everywhere. Our scouts have reported the terrain clear. Louis will catch up to the others for a night here. And we can ride a few hours more to be better rested and in full possession of a perfect campsite. You should be thinking of attack not defence!’


Dragonetz dropped to his knees in the dust, still holding the reins of Aliénor’s mount. He unsheathed his sword and held the hilt out towards her. ‘By my oath to you, by all that’s sacred, I swear I would rather you kill me with the same sword by which you made me knight, than make this wrong choice.’


Her eyes flashed at him, impatient. ‘Enough histrionics, Dragonetz. I am not so easily swayed.’ She lashed out at him with a boot, kicking his hands off her reins and dropping his sword in the dust. ‘Leave me. I want only loyal men beside me. Give the orders, de Rançon, then ride with me. Let those who see bog-sprites and night-mares go back to Paris where they belong!’ As she spurred her horse into a canter, Dragonetz picked his sword out of the dust. His father’s men were with him in seconds, bear-like Raoulf and his golden son Arnaut, ready to kill or die for him, as he was for Aliénor.


‘You heard our orders,’ he told them curtly. ‘Tell the men.’ They’d been with him long enough to say nothing, but do exactly what they’d been told. Dragonetz ignored de Maurienne’s impotent clucking, mounted his horse and rode on along the Kazik Beli Pass, down the other side of the mountains until they reached an inviting plateau. There had been no attacks, not even one sighting of a Seljuq. The surroundings were clearly visible from the campsite and Aliénor was protected by de Rançon and her Guard, including Dragonetz’ men. Raoulf would rage at being given the slip but then if Dragonetz was to suffer Raoulf’s anger, they would both still be alive. He would take no-one with him and then he could take no-one down with him if he were wrong, for there would be a reckoning with Aliénor in either case.


Dragonetz apologised to his horse, left the army setting up camp and galloped like a raised ghost back along the route they’d just travelled, back to Mount Cadmus.