You would not bee-lieve some of this bee-haviour but it's true!

To become a registered beekeeper here in Provence, I took a practical course during 2014 and since then I've looked after my hives, Endeavour, Diligence and Resolution (named by my husband). 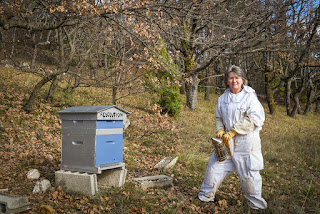 Nothing tastes as good as honey produced by your own bees from your own 'terroir' (a French word that is more emotional than 'soil' or 'land'). It's not easy these days to keep honeybees alive but that makes beekeeping even more important, even on my small scale.

I never thought I'd be brave enough to become a beekeeper but here I am, fascinated by the habits of creatures that have been farmed by humans since prehistory, for almost 9,000 years according to archaeological evidence. And yet there is still so much we don't know. Which is good for a novelist! 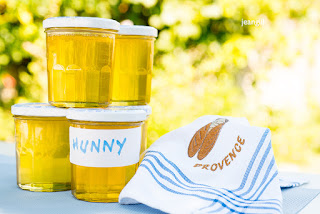 When I realised that my heroine shape-shifted into a bee, I knew I was going to enjoy the research. Here are some amazing bee-facts. Not all of them found their way into Queen of the Warrior Bees but Mielitta's experiences as a bee draw on my own experience too. I shall reveal some of my own experiences in the next blog and I hope you enjoy finding out about bees as much as I have. 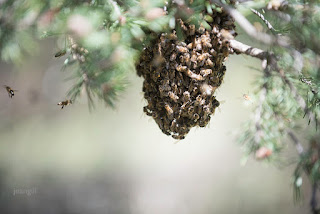 Extract from The Queen of The Warrior Bees

Why was the Forest forbidden? The very word was unmentionable. Yet everybody knew it was out there. Otherwise, how could children scare each other with whispered stories of what might be in the Forest? Gigantic sticky-buds, striped man-eaters, slithery poison? Their imaginations ran wild in a tamed world. But as each child reached Maturity and passed – or failed – the ritual test, the word Forest disappeared from the new adult’s mind, like a leaf dropping in autumn.
Mielitta had tried to ask adults why the Forest was forbidden but the word tied her tongue in tangled roots and instead she found herself asking the way to the schoolroom, or some other question so ludicrous that she was mocked for her stupidity. She sensed magecraft twisting her words but she could not force a different path from the one required of good citizens.
Now she was the only child who'd seen eighteen year-cycles and still been told she was not ready for testing. Her old playmates moved around the same halls as she did, girls in silken robes, boys in leatherette jerkins and long trews, while she still wore a tabard over a child’s short britches and stuffed her hair into the coarse netting of a servant’s ugly snood.
Flowers, thought Mielitta, as three girls in gowns like satin petals rustled past her. Grace, Felicity and Espoir had turned into a golden daffodil, a blue pansy and a violet campanula respectively. Mielitta knew these flowers from the books in the library, which she was tasked with cleaning each week. She remembered when the golden daffodil used to play leapfrog against the stable wall and when the violet campanula had linked pinkie fingers with her, swearing friendship forever. But even then, her finding had set her apart. All the other children had been born in the Citadel, not discovered as a baby by the Mage-Smith. She would always be a foundling, a freak.
‘The stones be with you, Lady Grace, Lady Felicity, Lady Espoir,’ murmured Mielitta, lowering her eyes. Barely nodding slender necks, expressions stonier than the walls they passed, the ladies swished past in silence, the better to ignore such a freak.
Had they forgotten her when they reached maturity? Or did they prefer to forget their broken promises, made by childish pinkie fingers?
As the chirruping gossip started up again behind her, Mielitta was warned of a potentially worse encounter by the brown scent of peat, a metallic clank and rumbling voices. She shrank into the shadows of an alcove, held her breath. Whichever route she took from her bed to the kitchen, there was always the risk of meeting Jannlou and his cronies.
I hope you enjoyed this blog, creating a buzz for my new novel. You can find out more and continue reading the first two chapters of Queen of the Warrior Bees here.
Posted by Jean Gill at June 07, 2019