During the 12th Century, there were two crusades which pitted Christian armies against Muslims and Jews in 'the Holy Land' and in continental Europe. However, it would be as naive to think that these faith communities were 'enemies' throughout the 12th Century as to think that Germany was an enemy to  the U.K. or to France throughout the 20th Century. Wars and political alliances have never been simple, and the true story of El Rey Lobo, the Wolf King, sheds light on real politics in 1153.


Not a fantasy invention but a real historical figure, the man nicknamed 'El Rey Lobo' in Spanish ('The Wolf King'), ruled the kingdom of Murcia from 1147, when he was twenty-three years old, until his death in 1172. He was crucial in the defence of the Christian kingdoms in the north of the Iberian Peninsula, against the Almohad Muslims in the south - and he was a Muslim.

Typical of the complications in real history, his ancestors had converted to the Muslim faith, so he was described as 'muwallad', an Arabic term for 'of mixed background'. Some say his nickname came from the family name Lope, which was abandoned when his Christian forebears converted to Islam.

In 1153, Abu ʿAbd Allāh Muḥammad ibn Mardanīš (to give the Wolf King his full name) was the King of Valencia and Murcia. For the more romantically inclined, his wolf nickname could have arisen from stories such as his treatment of a relative, Yūsuf, who challenged his authority. Having won a battle against Yūsuf, El Rey Lobo threatened to gouge out his eyes unless he gave the order to surrender. Yūsuf refused and lost his right eye. El Rey Lobo then ordered Yūsuf's wife to surrender the castle or else watch her husband blinded. She refused and Yūsuf's other eye was removed. He was then imprisoned. Such was the mercy of the Wolf King.

His kingdoms were sandwiched between the Christian realms of Barcelona and Aragon (both ruled by the Count of Barcelona, thanks to the marriage coup of the century) and the southern taifas of Al-Andalus (Muslim Spain). Relationships were amicable between El Rey Lobo and his Christian neighbours, with trade links and tolerance of mixed-faith communities.

Tolerance did not mean equality and the laws favoured the faith group in power, whether in Muslim Murcia or Christian Aragon. Jews held positions of high status in both Muslim and Christian kingdoms but were expected to keep to their own community for accommodation, social occasions and - a big cultural division - eating.

One example of a Christian ruler's laws: 'I likewise grant to all settlers this prerogative... whether Christian, Moor or Jew, free or servile, [they] should come in safety'

[In a court case] the Christian should swear on the cross and the Jew on the Torah. And if the Jew or Christian does not want to swear, he should lose the case.
(from The Code of Cuença, late 12th Century)

Relationships were not amicable between El Rey Lobo and his fanatical southern neighbours, the Almohad Muslims. These invaders brought extremist views with them from North Africa and, even more than they hated Christians, they hated their fellow-Muslims. They hated the Almoravids, Muslims who'd been lords of Al-Andalus for centuries until the Almohads arrived. And they hated those like El Rey Lobo, of 'mixed' background.

In short, Muslims who'd been settled a long time on the Iberian Peninsula, and who now governed peaceful mixed-faith communities, betrayed their own faith, from the Almohad point of view, and were worse than Christians.

There was no doubt that the Almohads' conquest of southern Spain and advance northwards was El Rey Lobo's biggest threat. An alliance with his northern, Christian neighbours was in both their interests. How was that alliance secured? Did Ramon Berengeur IV of Barcelona and Aragon perhaps take a party of his men to El Rey Lobo's stronghold of Monteagudo? What did Berengeur offer to gain Murcia's defence of his southern border?

That meeting is the starting-point for my historical novel 'Song Hereafter', in the court of El Rey Lobo, where Ramon Berengeur and his two commanders seek an alliance with Murcia. One of those commanders is Malik, the Muslim from Zaragoza, and one is his friend, the Christian warrior and troubadour, Dragonetz los Pros, fictional hero of The Troubadours Quartet. 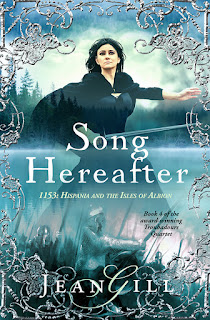 'Usually when El Rey Lobo bared his teeth, everyone in his line of sight wondered whether to do likewise and call it smiling, or to wait and pray for invisibility. Men had been killed for doing either. He had earned his nickname ‘the Wolf King’. The men in front of the king today were not, however, his courtiers but his Christian neighbours of Barcelone: Ramon Berenguer and two of his commanders. They were not currying favour but seeking an alliance.

Ramon was sombre. ‘Without the King of Murcia, we would have the Almohads in our gardens. I hear they make a virtue of killing.’
‘And of dying, too. In order to ‘purge’ this land.’ the king replied. At the mention of the Almohads, El Rey Lobo’s face darkened beneath his turban, and his mouth pursed as if accustomed to spit at the name. His swarthy features, oiled beard and flowing robes gave no sign of his Christian ancestry and it had been many generations since his family had converted to the Muslim faith of their overlords.
He continued, ‘They will not rest until all our people are dead. All of our faith who have made this country our home for generations. We have ‘sinned’, we are ‘unbelievers’ and the penalty is death for me, for our wives, for our children, for men like your commander Malik. They will make slaves of Jews and Christians but us, they will kill.
They are superstitious barbarians from the hills of Africa! They shave their heads before battle. What pious man would do such a thing? And their black slaves thump on great drums the size of cartwheels. When you hear the beat of their war-drums, you hear your own death. This is what my men must face! Their own hearts beating in fear!’
Dragonetz listened intently to his Liege and the Wolf King, sifting courtesies from nuggets of information. They were all waiting for the king’s terms.
El Rey Lobo dismissed the Almohads with a defiant gesture and began the bargaining. ‘The Almohads are not causing me a problem today. If you want to solve the problems I have today, go and find me a mintmaster and an expert in siege warfare.’ He paused for thought, then held up a third finger. ‘And somebody who will repair a paper mill. These are the problems that take up a king’s time! When you take away these headaches, we can talk about protecting boundaries and Almohads!’

To continue reading, for more details and buy links for Song Hereafter (the last book in the award-winning Troubadours Quartet) please visit my website . Book 1 Song at Dawn is on promotion at 99c / 99p if you wish to start this epic saga at the beginning but Song Hereafter can be read as a standalone.