Depression and a baby deer

I let myself get bogged down in judging books for a competition, in support and feedback to other writers, in thousands of photographs both for a client and for me, after an amazing but hectic trip to Venice, and of course in a million tedious domestic chores that I'd been putting off. I felt I was scrambling to meet self-imposed deadlines and forever chasing unkept promises, keeping no-one happy, least of all me. I was starting to feel guilty before I checked my mail, knowing that there would be a reminder for something to do. It was too long since I'd spent time in the 12th century and I saw little chance of getting back there. In those trivial ways that matter to a novelist, life was getting me down.


Then my husband yelled for me to look out the window. He'd just seen a mother and bambi sauntering down the drive and I caught them bounding into the field opposite. The mother came back to collect her little one who'd lost her in the long grass, poppies and wildflowers. Then off they sprang, the baby's ears appearing and disappearing in the greenery. Peace returned. Looking at two pairs of ears is more important that the things I don't get done. 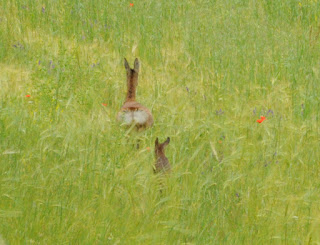 To add to my newly-recovered zen state, I've had several messages all at once, suggesting that my time wasn't wasted, so I can combine feeling virtuous with returning to the 12th century.

Congratulations to the winner of nine signed first editions from different authors names from all over the world went into the draw and the lucky reader lives in Spain.. Books are heading your way from all the authors.


If you want to help me choose my 'look', pop along to Kristin Gleeson's website where you'll see 3 author photos - I can't choose between them. A strange fact is that amazon.fr  doesn't allow author photos with pets. Other amazons have no such prejudice.


This made me wonder about cultural differences, to which I am more sensitive than usual after being asked for passages from my books 'suitable for a GCSE English comprehension in a textbook for 2nd language English learners in other countries.' Further detail required that the passages 'be demanding but have 'no politics, no sex, no religion, and definitely no pigs in their content'. Searching 14 books with these criteria in mind, you'd be surprised how full my books are of politics, sex, religion and  pigs. I hadn't realised how controversial my work is, and I feel very proud.


After one dead end - dogs would be considered dirty in some of the cultures using the textbook - I did find something suitable but the whole exercise left me bemused. I'm not sure what my cultural background is but I know it 'allows' me to read work written in cultures which impose all kinds of behaviour and topics that I find unacceptable. Two questions come to mind; if you are studying a language but everything in that language which doesn't fit with your culture is censored, are you really studying the language; and, should tolerance accept intolerance? The old paradox. My answer is always that you reach people in closed cultures by reaching them at all. If that means not mentioning pigs, or dogs, so be it. It doesn't mean I like it though.


I'm nearly half-way through the year and 43,000 words through my follow-up to 'Song at Dawn', which has kept its working title of 'Bladesong', announced for the first time in my recent interview for Kristin. She asked some hard questions!

Extract from the interview. Read the full interview here
K- One interesting aspect of the novel is Dragonetz’s paper manufacture and the vatican’s determination to prevent it.
Is this based on fact?
J- You've reminded me! Yes! Completely! This was one of the
facts that really fixed the choice of period for me. I am still absolutely incensed at the various ways the Roman Catholic Church destroyed scientific, medical and engineering progress for centuries. There really were paper-mills created by Christian Europeans, who learned the skills from their Arab neighbours in Al-Andalus (modern Spain) but 'the work of the devil' was successfully eradicated from Christian countries. Needless to say, the Church preserved a profitable monopoly on reading and writing this way.

I was a teacher for many years and someone who inspired me was the great Brazilian educationalist Paolo Freire. I attended a talk he gave at York University, where I was a trainee teacher. He was exiled for teaching peasants to read and write, and I never forgot what he taught me - that literacy is power. Making paper was a revolutionary step, which is why the Vatican stopped it as long as possible.

Exploring the twelfth century led me to understand how highly developed some civilisations were, and the ways in which individuals shared this knowledge even when institutions were out to prevent them.

To return to where the Blog started, with my mind elsewhere:-
Venice was amazing. Worse and better than I'd remembered. A hundred thousand people invading St Mark's daily at 9am and returning to their waterbuses at 5pm, having seen  only the 2hour queues for the Basilica and the Doge's palace. Those lucky enough to time their trip for a day of torrential rain saw even less, with the additional pleasure of likely death by umbrella spoke on overcrowded waterbuses.

However, there was also the 5am shoot in breathtaking dawn solitude, the unexpected glitz of the Americas Cup and the Sensa Festival (where the Doge symbolically married the sea in olden times), lunch with a dear Austrian fiend also in Venice, and the personal demonstration by a master glassmaker on Murano, as we were the only tourists who visited that particular atelier. He said my photos were 'bellissima'. I was happy.

I didn't take these photos. Venice made them.

More of my Venice photos