Journal Review of 'Song at Dawn'

Lela Michael's review of 'Song at Dawn' for 'Self-Publishing Review'


About the reviewer:- Lela Michael has been a freelance copy editor and writer’s assistant since 2007. She currently serves as editor of the website Beneficent Bards. You’ll find her on Twitter as @TheBookMotel. 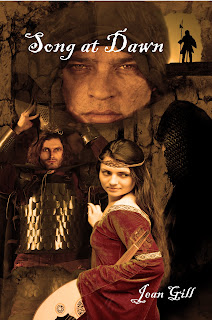 Historical thriller/love story set in Narbonne just after the Second Crusade. 1150 in Provence, where love and marriage are as divided as Christian and Muslim. On the run from abuse, Estela’s musical talent finds a patron in Alienor of Aquitaine and more than a music tutor in the finest troubadour of the age, Alienor’s Commander of the Guard. Weary of war, Dragonetz los Pros uses Jewish money and Moorish expertise to build that most modern of inventions, a papermill,drawing the wrath of the Church down on his head. Their enemies gather, ready to light the political and religious powder-keg of medieval Narbonne.


Jean Gill’s extensive, caring research for her book Song of Dawn places this novel appropriately into the classification of Historical Novel. The front and back matter provide us with a period map, a list of historical figures appearing in the book, and an impressive list of research sources consulted. That the author is a highly-skilled and respectful researcher is all well and good, but the next question is,
can she write fiction? In a word, yes.

Our protagonist’s personality, chief motivations, and obstacles are outlined within the first two pages; two other major characters are outlined and the plot foreshadowed by the end of the first chapter; and the remaining 22 chapters, with the author’s deft one-two punch of complex characters and an even more complex plot, prove this novel a decided “page-turner.”
The plot yields plentiful fodder on the politics of power, both personal and societal; the consequences of religious and ethnic bigotry are explored in depth; we learn that it was once a crime punishable by death to manufacture paper; we receive more than a glimpse of what it might have been like to live in another time period. The mentions of natural remedies and how they were used in the 12th century spice things up, so to speak, and the presence of a big white dog in the lengthy cast of characters doesn’t hurt, either. At 354 pages, a lack of plot is not a concern whatsoever.

It is by way of this intricate plot that Jean Gill extracts payback for time spent on her meticulous research by demanding that her reader pay attention. There isn’t one sentence in this book that doesn’t move the story forward.

Space doesn’t permit commentary on all of the numerous characters in Song at Dawn, but a brief word on the main character, Estela de Matin. Gill inserts into the story something that sets Estela apart from other fictional female characters such as Jane Eyre, i.e., young women who find themselves cast alone into a world controlled by men and stifling social institutions: Estela wants to be a musical performer. Estela’s desire to develop her talent is arguably her greatest motivation, or at the least equal to, her desire for “true” love and a natural curiosity about sex. In fact, it is in Chapter 1 that Estela must pass an audition in order to literally keep from getting killed. Her beautiful voice saves her.

With its detailed historical setting, a believable, page-turning plot, and memorable characters, Song at Dawn is an enjoyable, interesting read. These elements of successful craftsmanship in place, Jean Gill goes the extra literary mile by using an authentic, consistent narrative voice—a voice I not only trust, but am left wanting to hear again.

I reluctantly give Song at Dawn a rating of 4 of 5 stars. The paperback copy I read contained several commas that should have been periods, a couple of minor typos, a few formatting problems (all at the bottom of the page), and one obvious use of a cliché. If these things have since been fixed, please consider my rating 5-star.
Posted by Jean Gill at January 03, 2012